I don’t know if I have a picture of the old dispensary. … You went in and there were two doors which wouldn’t be that way anymore now. This would have colored up here on this side. And this white on this side.
–from Interview with Katherine Smith (October 1984) 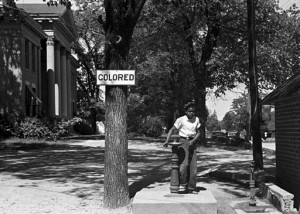 You probably noticed that the photos linked in the other sections of the exhibit have a definite racial context. Some of them use language to designate that certain spaces and activities were for one race or the other, while others feature depictions of either whites or African Americans going about their lives in a company town.

What follows is a selected group of images that contrast black and white spaces and activities. In general, this kind of racially-marked image represents only a portion of the whole. For example, most buildings that were probably designated for white people did not require explicit labeling; it was just understood. Other facilities might be used by both races and were likewise not labeled. Generally, the labeling of ‘colored’ or ‘white’ was used in cases of highly segregated spaces like housing and schools.

The focus on comparisons will necessarily obscure some facts — namely, which aspects of company town life were very unevenly photographed. For example, the images of black children are few and far between compared with their white counterparts. Though many interviews with African Americans discuss May Day, all 15 photographs we have of those performances and drills feature white children.

Many interviews in the Working Lives Oral History Project mention details about life in a company town, but three really make it the focus.

Unlike Emmons and Harris, Smith was white. While her account of the camp’s amenities is similar to that of the other women, her perspective is very different. It helps to illustrate the perhaps hidden differences that would’ve been experienced by families of different races in a segregated company town.

While facilities were separate, often they were photographed in the same session or framed in the same way, which actually tends to underscore how similar they are. Many of these images would not be identifiable as “black” or “white” without the accompanying text. But just because they look the same doesn’t necessarily mean they are — these images were, after all, created by the companies, who had vested interests in appearances.

Click on any image to see it in more detail in our digital archives interface.

There don’t seem to be many mixed spaces, but that’s perhaps by design. Many of these photos are devoid of people entirely, focusing instead on the buildings themselves. Interviews like the one quoted above reveal that some facilities would have been used by workers and families of both races, but probably had separate doors and service windows.

Examples of the raciality of public space: left, blacks and whites standing together outside the building — a building with two entrances; right, from a different commissary, two service counters, one for each race.

Here are examples of hidden ways in which facilities might be superficially segregated but still reflect a complex reality.